UGLPOA Environmental Committee would like to remind residents of West Milford's ban on using fertilizers containing phosphorus.
It is also requested that residents do not grow plants or vegetables on docks or near to the lake edge where run off would cause phosphorus or nitrogen (common in plant feeding applications) to flow into the lake.

The additional chemicals alter the pH and speed up the eutrophication of the Lake. This means that dissolved oxygen is reduced, thereby threatening the health of fish and other creatures. Increased phosphorus will also cause algae blooms, create more weeds, and lead to an overall deterioration in the water quality.

Your co-operation is greatly appreciated. 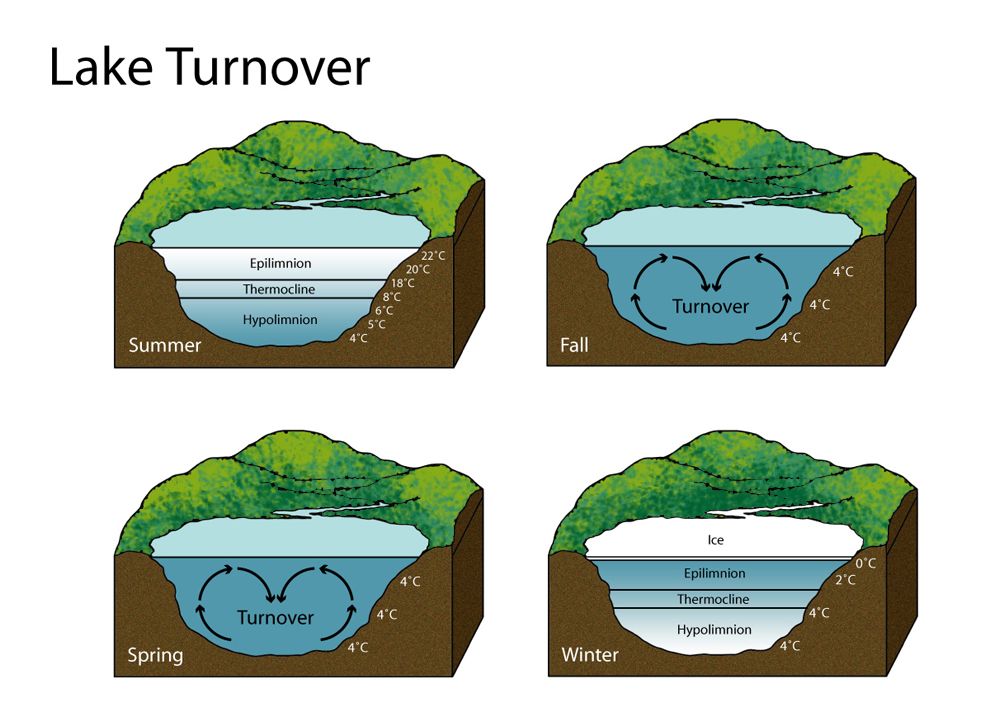 Lake turnover is the process of a lake's water turning over from top (epilimnion) to bottom (hypolimnion). During the summer, the epilimnion, or surface layer, is the warmest. It is heated by the sun. The deepest layer, the hypolimnion, is the coldest.

When the surface water begins to cool it becomes more dense, causing it to sink. This dense water forces the water of the hypolimnion to rise, "turning over" the layers.

Here's a simple definition: Turnover is the period of time when the lake is circulating from top to bottom and the water temperature is uniform throughout.

When the turnover is in progress:

The entire water column will be at the same temperature, give or take a degree or two.
Sudden decrease in water clarity. Water circulation puts particles into suspension, so the water often looks "dirty" during turnover. Clumps of decaying organic matter on the surface. The circulating action of the turnover causes material to break loose from the bottom. Sometimes you'll see large mats of brownish glop floating everywhere.

So Larry Kovar (Aquatic Annalists) did some testing on the lake as sent in report and not much difference in temperature from top to bottom. Would support above . The surface temperature of our lake was 87 then went to 75 with the rain and cooler temperature. The now cooler dense water then sinks to the bottom and bottom water comes to top along with a lot of sediment. There is not much algae in the water. Many lakes around the are are experiencing this with in the past two weeks.

The Environmental Committee began monitoring the apparent fish kill when it first started last week (June 1 2016) and immediately contacted our Water Quality Consultant. A count of the fish began, species were identified and the situation discussed with members of the Moe Mountain Bass Fishing Club. The numbers of fish washing ashore at the dam and beach peaked on Sunday and have continued to fall. The NJ Division of Fish and Fisheries were informed of our monitoring and the data. Their interpretation is to lay blame on the rapid recent air and water temperature rise which causes a "spring fish kill" whilst the fish adapt to the temporary oxygen depletion. The Division is not concerned about the species affected or the relatively low numbers involved, and reported that similar circumstances existed this week in Budd Lake and Greenwood Lake.

The Committee would like to thank the Staff at the beach for their assistance in counting the fish and the unpleasant task of collecting, handling and disposing of them. Whilst we believe that this event was only linked to the sudden rise in temperature we urge all residents to contact the office if they see any evidence of the use of banned fertilizers, discharging of waste into the Lake or supply streams, or if they suspect that a faulty septic system exists in their neighborhood. It takes a Village to keep our Lake healthy

Everything you need to know about HABs in Upper Greenwood Lake.

Please take the time to watch this video:

A Homeowner's Guide to Septic Maintenance 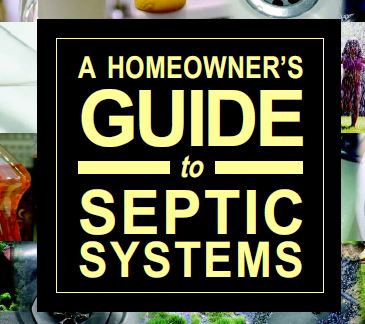 How To Recycle Anything

An A-Z Guide: Recycle Anything