to be used exclusively for the following purposes:
Radio station or any other purpose deemed necessary by the United States Government.

TO HAVE AND TO HOLD the said premises with their appurtenances for the term beginning July 1,1942, and ending with June 30th, 1943.”

This fortuitous document gives credence to the story which Ted Hajek relates in “A conversation with Theodore (Ted) Hajek, Jr.” in Upper Greenwood Lake’s Reflections of the Past—“A Collection of Memories” Celebrating 75 Years 1932-2007.”

“During World War II the area around the clubhouse was off limits to the area residents. A house on Magnolia Road–owned by a family named Huhn–was taken over by the army and became the officer’s headquarters for a nearby army anti-aircraft gun installation. The gun was located on a pad adjoining St. Cecelia’s parking lot. The UGL clubhouse became the mess hall for the billeted soldiers who lived in tents on the lawn in front. I believe I found one of the mess hall tables in the old clubhouse basement–the inside of the drawer is still a khaki-green color. (See photos)
(In 1998 Ted purchased the original UGLPOA clubhouse and rebuilt it as his residence).”

How a copy of the lease became an Upper Greenwood Lake Association archive and the centerpiece of this article is an interesting story.

On March 20, 2015, Tanya Mekelburg, UGLPOA Office Administrator, forwarded me an email from Diana Fahy. Diana was hoping to track down the stained glass windows that were part of St. Cecelia’s Catholic Church. She said her grandfather Robert M. Huhn had donated windows to the church and she was trying to locate what happened to them.

I was overjoyed to recognize the name Huhn, and I immediately contacted Ted. He in turn contacted Diana who – while searching through her father’s papers – found a lease for her grandparents’ house by the U.S. Government during the war. The lease supports Ted’s remembrances of his mother saying she was stopped from visiting his uncle’s summer-house on Glenridge Road (the street behind the Huhn bungalow) and of the time Diana’s grandmother, Anna Huhn, – a neighbor and friend of the Hajek family – told him about the troops, tents, and gun installation that he references in his conversation in “A Collection of Memories.”

Inquiries to verify the use of the clubhouse and grounds by the United States of America were not fruitful. I made several calls to various army and governmental agencies and historical societies without success. Robert Moskin, former UGL Board President, was not even aware of “the story” and, to his recollection, the Board of Trustees did not hold Board meetings at the lake during the war years. Minutes and/or pertinent documents of that time are either missing or non-existent.

In 2007 Jack Goudsward, a local historian, wrote in an email “One thing you must remember is that the records were destroyed at the end of the war that deal with this type of base.” Nine years later – after receiving a copy of the lease and evidence that army personnel used the “old” clubhouse and after reviewing old air photos – Jack wrote back that “it looks like a Tent Camp.”

St. Cecilia Church at Glenridge Road in Upper Greenwood Lake was built and dedicated in 1938 and served the local community until the mid – ‘70s. The building is now a private home. Ted was able to track down St. Cecelia’s stained glass windows. They were saved and now hang in the annex hall of Our Lady Queen of Peace Church, 1904 Union Valley Road, Hewitt, NJ. Ted found the windows that were donated by Diana’s grandparents. He was able to obtain the dedication window with the family names that he presented to Diana and her family. Diana later journeyed to the Queen of Peace Church to see the stained glass window of her search. (See photos) 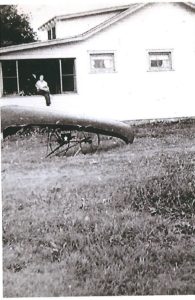 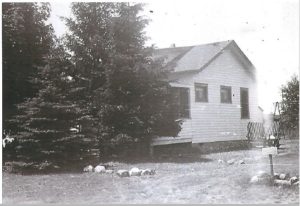 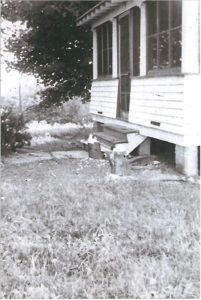